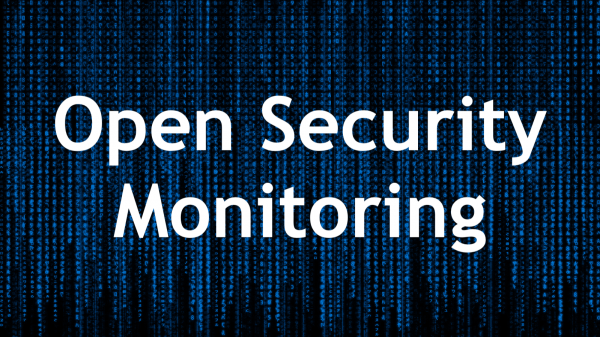 I’ve spent most of my career defending environments of all sizes.  What I’ve found is that the job of a defender is much less flashier and thankless as compared to an “ethical hacker.”  While there are volumes of articles, guides, and talks on penetration testing and the latest attacks, there isn’t much on defending or security monitoring.  With plenty of free tools and exploits for attackers (such as the venerable Kali Linux), there doesn’t seem to be as much excitement for building similar tools for defenders.  In fact, there’s a notion that in order to properly defend a network, you must spend thousands or even millions of dollars.

Enter “Open Security Monitoring”, or “OSM”, which I refer to as a system of integrated open source security tools working together to secure networks of all sizes and all budgets.  Why open source?  There are three specific advantages:

In this series, I will walk through key OSM components and the relevant tools I’ve used to defend real-world environments:

You could certainly achieve this without using open source tools, but the point here is that you can build a robust security monitoring architecture with limited financial resources.  And if you have some money to spend, open source security tools complement commercial systems well.  Each environment is unique and you’ll likely have a mix of open source and commercial products.

We’ve defined the concept of Open Security Monitoring and why there is a need for open source security tools.  Next, we’ll explore the first of four OSM components, intrusion detection/prevention systems.

If you're new to @Zeekurity, my step-by-step #ZeekurityZenZeries guides you through setting up and getting the most from your #Zeek sensor.

The 🧵 below links to all parts of the guide.

In the first of our two-part "Trusting Zero Trust" blog, we learned what #ZeroTrust is really all about.

In Part 2, we look at why we should implement Zero Trust controls and monitoring to get the most from our Zero Trust Architecture.

They want how much for the Dynamic Island? Oof, think I’ll stick with my Static Peninsula.